Akerlofs model identifies potentially serious problems in some markets: asymmetric information creates an incentive for individuals to conceal private information when they interact in markets, a problem assumed to be more common with suppliers than with consumers. Such problems, if left unabated, theoretically cause both sellers and potential buyers of high quality goods to leave the market leading to its demise.

Markets for used cars (Akerlofs favorite example) thrive, however, notwithstanding the pervasiveness of asymmetric information in this market. We also witness successful exchanges in such markets as automotive repair, software, and home remodeling and construction, markets consisting of experience goods in which asymmetric information is prevalent. Attributing the success of these markets to government intervention and regulation is dubious.

Perhaps an even more challenging empirical anomaly to Akerlofs "lemons theory" is the overwhelming success of electronic commerce and Internet markets. Despite the widespread media attention about "dot-com" failures, commerce conducted over the Internet continues to grow. The ubiquity of asymmetric information and the ineffectiveness of formal legal institutions to compel cooperation in these markets have not proven to be obstacles to the growth of electronic commerce.

We contend that, as in most markets, it is the entrepreneurial innovations employed to ameliorate potential "lemons" problems in Internet markets -markets where exchange participants are largely unconstrained by formal legal institutions - that explain the success of electronic commerce. It is precisely the self-governing mechanisms developed by private firms, and the rules or norms that have evolved, that promote trust among strangers interacting in cyberspace. Such success can be attributed to the private sector, not the public sector; that the incentive to facilitate exchange in a safe and secure environment leads entrepreneurs to discover and to experiment with new technologies and ideas in their quest to provide such a marketplace. What Akerlof perceives as problems in market systems, have actually given rise to Hayek solutions, as private actors situated in particular time and place have adjusted their behavior to realize the mutual gains from exchange. As Hayek (1948: 103-4) argued:

The confusion between the objective facts of the situation [e.g., Akerlof asymmetries] and the character of human responses to it tends to conceal from us the important fact that competition is the more important the more complex or "imperfect" are the objective conditions in which it has to operate. Indeed, far from competition being beneficial only when it is "perfect," I am inclined to argue that the need for competition is nowhere greater than in fields in which the nature of the commodities or services makes it impossible that it ever should create a perfect market in the theoretical sense.

The success of e-commerce illustrates Hayek's notion of competition. Internet commerce has, and continues to grow rapidly. Retailers selling over the Internet grew by one-third to 550,000 online businesses by mid-2000. Average revenue growth for these retailers increased by 130 percent from the previous year; exceeding $132 billion for 2000, up from $58 billion in 1999.3 Revenues of business to consumer (B2C) Internet retailers - roughly 20 percent of e-commerce - are projected to exceed $125 billion by 2004,4 increasing to $1.1 trillion by 2010.5

More intriguing is the success of Internet auction markets - the online equivalent of flea markets where unknown individuals exchange with each other from around the world. Aggregate Internet auction sales grew from about $7.3 million at the end of 1996 to $6.5 billion at the end of 2000; an average annual increase of 446 percent. And eBay, the market leader with an estimated 76 percent of the online auction traffic and over 85 percent of online auction sales, has a current membership of over 22.5 million users listing 700,000 items daily on its web site.

The Internet is seemingly an ideal marketplace for Akerlofs lemons theory to be tested. It consists of virtual markets in that exchange goods are sold sight unseen; exchange participants interact from distant geographic locations, most often from different states or even countries; payment is remitted prior to shipment of the exchange good; the probability of conducting subsequent exchanges is quite low, especially for auction market participants; and formal legal enforcement is emasculated and impractical for policing and mediating Internet transactions. Under such conditions, adverse selection and moral hazard ought to prevail thwarting the development of markets in cyberspace. The empirical observation of thriving markets against such a difficult backdrop should direct our attention to the multitude of ways in which market participants gain assurance and earn trust from one another (see Klein 1997 and 2000).

If you're wanting to learn how to set goals now for tomorrow's benefit. Then this may be the most important letter you'll ever read. You're About To Learn All About Growth Potential Without Potential Waste And How To Manage Your Money Principles, No Matter How Much Time You Have Had To Prepare. It doesn't matter if you've never experienced entrepreneurship up close and personal, This guide will tell you everything you need to know, without spending too much brainpower! 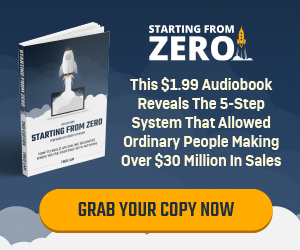 How to Start an Ecommerce Business